Notice: Dear Valued Customers, Please note that we will close our store on 30th and 31st of December 2019.
Therefor all orders placed after 27th of December will be processed on 1st of January 2020.

Skip to the beginning of the images gallery

Not sure which ADC you need ? Check our Analogue to Digital Buyers guide to compare our ADC expansion boards.

The two MCP3424 A/D converters communicate via i2c to the host Raspberry Pi giving you eight analogue inputs to use.  A logic level converter is included on the ADC Pi Plus board giving you a buffered 5V i2c port making it easy to add other I2C devices which operate at 5 volts without damaging the raspberry pi 3.3 volt i2c port.  The i2c buffer uses N-channel mosfets with a maximum drain current of 100mA.

The MCP3424 contains an on-board 2.048V reference voltage with an input range of ±2.048V differentially (full scale range of 4.096V/PGA).  A programmable Gain Amplifier gives the user a selectable gain of x1, x2, x4 or x8 before the analogue to digital conversion takes place.

We have a knowledge base article, ADC Sample Rate Comparison which has more detailed sample information and test scripts to compare the different MCP2424 ADC chip bit and sample rates.

Unused inputs should be tied to ground.

See our KB article for previous versions of this board. 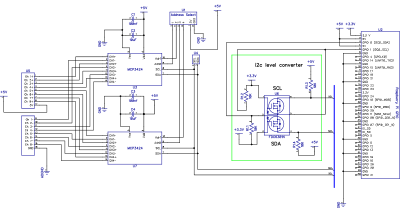 Download and print our PCB Header Assembly Jig to hold your circuit board when soldering the header pins.

Note:
Disconnect the ADC Differential Pi from the Raspberry Pi before changing the address pins.  You may need to short the 5V and ground with a resistor to discharge the capacitors in order for the new addresses to be recognised.

Do not under any circumstanced connect the two centre pins together.  This will create a direct short between the 5V and ground pins and will damage or destroy your Raspberry Pi and ADC Pi Plus board.

Write Your Own Review
Compare Products
Compare
Clear All
You have no items to compare.
Please wait...
Continue View cart & checkout Go to Wishlist Go to Compare